Ok. I know the 2015 World Series champion has been decided, and I (sadly–oh, so sadly) know that the champion was not the National League Champion New York Metropolitans. However, as a long-time fan of the antics of Mr. Met, I give you a forgotten Mets team booster: Lady Met.

First of all, why Major League Baseball is not selling short-sleeve Lady Met boleros, I WILL NEVER KNOW.

There is also an image of Lady Met crying in the rain, which feels apt after a tough end to a stellar 2015 Mets season.

Secondly, if you can name another ball club mascot with an article in The Paris Review, please get in touch.

I discovered Lady Met (and her mysterious relationship to the Mr. and Mrs. Met family of today,) when a friend asked for costume ideas for attending a Halloween night game at Citi Field. As a vintage lover, I had to suggest Mrs. Met! (Reader: She did it!)

In theory, Lady Met was Mr. Met’s girlfriend (until they tied the knot sometime in the 1970’s and became Mr. and Mrs. Met.) However, I’ve stumbled across memories of Lady Met having a Baby Met, and the idea that the current Mr. Met is actually the son or the original Mr. Met, so let’s just say that the Met family history is complicated.

I do love, however, that in a world gone casual, even a baseball team mascot used to have style. Plus, I have a new eBay alert.

It’s Friday! I encourage you all to have a Jean Harlow cocktail and find somewhere this weekend to wear a great party dress .

On Fridays in Maudetown, I’m going to feature a highlight from the shop–something special I’ve got on offer that begs a story. 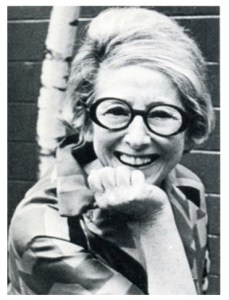 If you are Vera lover, you know who you are. You might even be the one who recently snapped up this tea towel within 24 hours of its listing!

Vera Neumann was an American artist and designer who, though best known for her boldly patterned scarves and linens, left behind a wealth of other work–from paintings to dresses, as well as her visionary entrepreneurial spirit. My favorite detail about her life is that her parents told her to find something she was passionate about and to pursue it–boldly. In turn, they supported her in her passion. (Parenting win!) Though Vera died in 1993, her designs live on in reissues at Crate and Barrel, Macy’s, Anthropologie and Target.

Her scarves and linens are VERY collectible, and I recently came across a Vera scarf I’ve never seen before!

The artist Alexander Calder (most well known for his graphic mobiles) was her good friend, and in the 1960s, Calder gave Neumann and her husband a mobile: Constellation.

The mobile inspired three scarves–one of which is pictured above and is now for sale in Maudetown. I’ve never seen a scarf with the original primary colors for sale! Though the scarf I have on offer is polyester, it’s highly collectible and quite rare.

Neumann’s work is so fun and bold and memorable. Who wouldn’t want an “I love you” tied around their neck to get through the day?

The scarf is in fine condition, and though ready for wear, would liven up any room if framed as a painting. Vera believed in emotional power of color, and it’s always amazing to me how fresh and happy her designs are. It’s no wonder they are still so collectible! 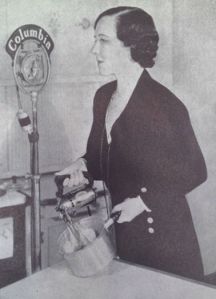 (Ida Cogsworth Bailey Allen for those sticklers for propriety.)

As a vintage lover, I am naturally a collector. My key collection focuses on cookbooks, homemaking guides and home economics textbooks from the mid-nineteenth century to the present day. I have so many gems that it’s time they took a walk into the world! So welcome to the first of a series:

The History of Homemaking: An Occasional Series from a Private Collection
(Maudetown style) 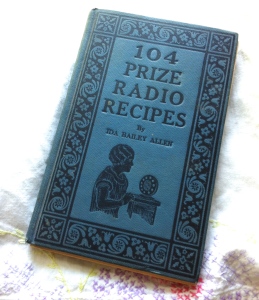 Born in 1885, Allen was a celebrity lifestyle guru who sat atop a multi-media empire–an early 20th-century Martha Stewart if you will. (One of the key takeaways when  studying history is that our sense that we are living in new and innovative times is really just an innate part of human psychology, rather than fact.) Allen was a prolific cookbook author (she wrote over fifty cookbooks, and the last one was published the year of death in 1973, when Allen was 88,) a radio and television host, a champion domestic advice giver, and one of the first to recognize the power of spot advertising as a way to build audience and media power.

104 Prize Radio Recipes leads off with a wish (and the motto of The National Radio Homemakers Club, an organization founded by Allen):

“Let us have better, happier homes and mutual helpfulness.” A sentiment that doesn’t feel particularly dated taken by itself. Of course, that’s not always the case in a domestic advice guide from 1928.

The most revealing section of the book considers mixing homes and careers. On one level, Allen’s advice seems to be a cheerleader for the cause. On the other, here’s how Allen closes out this essay:

“There is something you can do somewhere.

Perhaps you can make good cake, jam or doughnuts. Superlative cooking has made many fortunes.

Perhaps you sew well and rapidly–make original children’s clothes, dance extremely well, are successful in supervising servants, know the care of face or hair, how to get together lovely costumes for little money. Maybe you can grow flowers or do beautiful embroidery.

The world is full of things for women to do.

There is a place for you.”

Unless, it seems, your talents lie in the sciences, for example.

I’m not here to condemn Allen, because part of the lost history of early homemaking proponents was an attempt to legitimize women’s work in the home. The idea was that homemaking was a profession as worthy of study and rigorous analysis as any other, and I don’t necessarily disagree. What offends is he limitation of this role for only women, the extreme division of labor into “men’s work” and “women’s work,” and the tiny sphere that this movement allows women.

Even so Allen’s influence was wide-reaching, and I do love that even my random copy of this book features the pencil markings of a previous owner: 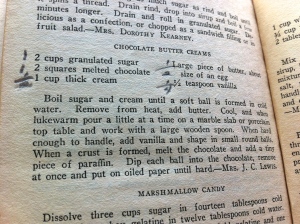 Who got time to remember 2 divided by 2? Best write it down!

At the end of the day, what attracts me most to the books I collect, and 104 Prize Radio Recipes is no exception, are the extreme contradictions and troublesome history of the home economics movement.

Here’s Allen quoted in The Pittsburgh Post-Gazette (December 29, 1939):
“Most of the heads of radio corporations haven’t considered women at all. I have met women all over the country and found them possessed of a high order of intelligence.” That sounds alright, no? Then the Post-Gazette writer (Mrs. Walter Ferguson) goes on to say herself that “Homemaking these days is not a job that can be successfully carried on by a romantic nitwit,” which leads us to Allen’s famous quote, “good home cooking was an antidote to the rising divorce rate.” Oh, Ida. 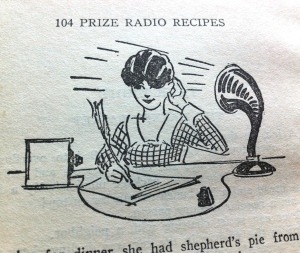 Still, Allen knew a thing or two about building a media empire, the power of building a networked legion of fans (modern mommy blogs, anyone?) and cooking on a budget.

I don’t wish her to be forgotten.

My new business cards arrived today, and in a world that spends a lot of time trading in digital communication, having something solid to hold was the moment that this project finally felt real.

Maudetown, LLC, is one of Madison, Wisconsin’s newest small businesses, and I couldn’t be more excited to share my finds with the world. My work has always been about harnessing the power of stories, and helping those stories find their unique audiences. This new (well newish–I’ve been selling vintage online since 2010!) venture is the same sort of work. The world is full of beautiful old things–all full of tangible history, personal stories, and imaginative possibilities. My job now is about getting those stories to new homes and caretakers.

Be bold, skip the mall, and let vintage help you tell your story.

Jen on the island of Crete